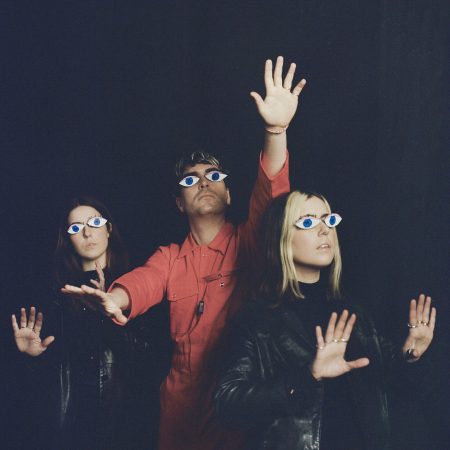 The band changed their name from Wovoka Gentle shortly before the release of they’re second album’ Writhing’.

Wovoka Gentle started their journey in Edinburgh, where Imogen was studying at the time. In 2014 the sisters’ folk band shared a stage with Will’s folk band. He’d started out playing in the west London scene that birthed Laura Marling, Noah and The Whale and Mumford and Sons. Indeed, his first released song was on a compilation from Communion, the label co-founded by Mumford’s Ben Lovett. “Ben was instrumental in encouraging me to get into music,” admits Will, whose first musical love was jazz piano. After that Edinburgh show, Will and the Masons, who’d grown up playing piano, violin and guitar, began collaborating. Working together, their imagination soared. One of their first projects was scoring a physical theatre show at the Edinburgh Fringe, an interest that finds form now in their very visual, occasionally provocative live performances.

Over the next two years they bunkered themselves in studios and spaces in Pembrokeshire, Fife and Edinburgh releasing three EPs and two singles via their management label. They were as prolific as they were exploratory, putting out eighteen songs in a burst of creativity and excitement. Their approach was clear from the start: the studio should be a playground, an electronic-meets-acoustic imagination zone. “Mine and Ellie’s background is very classical,” says Imogen. “But in the band we like finding and creating new sounds. When we’re recording we spread out all our gear, and all of the instruments, then anyone can pick up anything they like to find a new voice or make a new sound or add a new effect.” This is the Wovoka Gentle ethos in excelsis: in the words of Ellie, “how can we push this, make it as interesting as possible, but in an engaging way?”

In July 2015 they played their debut show at London’s folk ground zero, Cecil Sharp House. “We had this real thing where we wanted to broadcast ourselves still as a folk band,” remembers Will, “even though we’re interested in all different kinds of sounds and equipment and influences. But it was a real concerted decision not to disown the folk influence, which a lot of people have done recently from that London folk scene. They almost actively disowned it, which has been disappointing.”

Finally, a showcase at Rich Mix in east London in November 2017 resulted in a deal with perennially questing, indie label Nude. It was time to embark on their debut album. True to inventive form, Wovoka Gentle opted not to record in a traditional environment. Much of 2018 was spent in the ballroom of a mansion in Pembrokeshire, the trio the beneficiaries of a local arts organisation and gifted the space by its art-loving owner. Inside they gathered all their instruments, synthesisers and computers, vintage and cutting edge, while also inviting contributions from friends playing brass, clarinet, pedal-steel guitar,

They roamed outside, too, making weekly field recordings of nearby beaches, fields, caves and an industrial woollen mill. “There’s lots of rocks breaking,” says Imogen. “And there’s a transition track called ‘Josh, Shout Something!’ that’s the sound of one of our friends jumping into a manmade lagoon. It’s actually a belly-flop,” notes Ellie.

In 2018 released their debut single from the album. The ear-tingling psych-fi of ‘1,000 Opera Singers Working In Starbucks’ was inspired by an interview with author Nassim Nicholas Taleb and a comment on how we’ve gone from living in “mediocristan” to “extremistan”, about polarisation in creative industries – all of which might be news to the eager, largely male teenage players of ‘Fifa 19’, on which the track is a perhaps unlikely hit.

It was followed as a single by ‘Peculiar Form Of Sleep’, which showcases the glorious interplay of the three singers’ voices. “We’re keen not to have a lead vocalist,” says Ellie. “We change it up all the time. If Will is singing the melody, we might sing with him to make it sound more androgynous. But mostly it’s about what’s communicated in the song. Mine and Immie’s voices don’t always have enough grit for what the songs needs, so Will’s voice works instead.”

Range is shot through everything Wovoka Gentle do. It’s there in ‘Punxsutawney Phil,’ which speaks to the band’s appreciation for cosmic Americana. And for the film Groundhog Day, in which said rodent is the star (alongside Bill Murray, obvs). “That song is not at all formulaic,” reflects Will, “but it’s the result of a very familiar process to us: pairing an interesting time signature on an electronic rhythm with a pure acoustic guitar. It’s a really good example of collaging different sections together that may have come about at different times and wanting to push every idea to its limit, to make it as interesting and colourful as possible.”

Wovoka Gentle’s limitless horizons, and winning way with a song title, are also colourfully audible on ‘Tell ’Em Makoto!’ which starts with a hint of sea shanty, goes Pure Folk, then deploys a sample of gospel singer Mahalia Jackson to devastating effect. Will explains that it was inspired by the book ‘Culture Care’ by Makoto Fujimura. He talks about Mahalia Jackson and how people like her exist on the periphery of influence; they exert influence on people who are actual influencers, and that’s the role of art in society. And Mahalia Jackson is a good allegory for him. She was next to Martin Luther King during a speech that was flagging and she shouted to him, ‘Tell them about the dream, Martin!’ And that’s how the ‘I Have A Dream’ speech started.”

Equally exploratory is ‘Xerxes ’19’, which begins with birdsong, delicate acoustic guitar and gorgeous vocals from the band, before exploding into glitchy electronics, soaring beats and the exuberant voices of the Kids Club Kampala Choir as recorded by their friend working for the children’s charity in Uganda. “The beat was originally more influenced by Weather Report, a jazz odyssey,” says Will. “But listening back, with the kids choir especially, it has this really strong Fela Kuti vibe, which is in ‘Punxsutawney Phil’ too. That William Onyeabor/Fela Kuti vibe.”

Hooky meets heaviosity in five thrilling minutes, ‘Sin Is Crouching At Your Door’ is frankly magnificent. “In the recording and mixing stages we tried to retain the sound of wood, of physical surfaces and acoustic instruments, explains Will.

“We wanted that physicality, even when you have various synths, modular sequences and effects that could easily overtake it and make it an electronic song. So we tried to reign that in, which could be a distillation of what we try to do as a band: not allow the electronic elements to overwhelm.”
Ellie adds, “If it wasn’t handled properly that song could have gone stadium rock or something else totally huge that wasn’t in our world.”

“Yeah, so we tried to restrain it and incorporate natural sounds,” says Imogen. It’s not heavy metal – it’s heavy wood!”

Setting their controls for the heart of the Sun, these thirteen tracks were recorded and largely produced by the band. Having kicked off the album process with Gareth Jones (Depeche Mode, Nick Cave and the Bad Seeds, Wire) the band later teamed up with friend and peer Sam Petts-Davies for mixing and additional production work. Petts-Davies engineered Radiohead’s ‘A Moon Shaped Pool’, co-produced Thom Yorke’s ‘Suspiria’ soundtrack, and has worked extensively with Nigel Godrich and Roger Waters. As Wovoka Gentle put it: “Artists not like us, basically, which is why it felt like a wild card. But that’s why we liked it.”

Wovoka Gentle Start Clanging Cymbals, then: as Ellie says, “it’s announcing that we’re here, we’re starting to make noise and we’re not just playing music…” As the final words we hear on the album, fading into ether, remind us, this is – first and last and always, “happy music…”Get ready then for a kaleidoscopic, experimental, psychtronica, folk-rock wonderland .

Start Clanging Cymbals was released on Nude in 2019.

The world is changed.SARS-CoV-2, bringer of death and desolation. Tours cancelled, records scrapped, studios abandoned. All is still. Out of the mire and the murk, three shadows appear[backlit]. Could it be? The release of acclaimed debut album Start Clanging Cymbals[insert:“Hard to classify and even harder not to love”-Uncut/“Ambition and self assured daring”-MOJO/[soundtrackFIFA/SIMS video-games] tookWillian J. Stokes and twinsEllie Mason and Imogen Mason across Europe and the UK, from Edinburgh’s Corn Exchange to Amsterdam’s Paradiso, drawing fans like iron filings to a magnet as they went. Voka Gentle; the unique trio of three producers, three singers and three songwriters, concluded their live crusade with a show at London’s Brixton Academy, opening for the legendary Flaming Lips in celebration of their seminalopus The Soft Bulletin.

Before long, though, the demon viral horde struck. Voka Gentle prepared to lie low in London and wait for the storm to blow over before taking their immersive audio-visual live performance back on the road. It was then that a chance phone call with Sam Grant, producer and guitarist with neo-metal battalion Pigs Pigs Pigs Pigs Pigs Pigs Pigs, coaxed them blinking into the sunshine and up toNewcastle’s Blank studios. Here, in just two weeks, they found themselves recording nothing less than a second full-length studio album. Bloodied by the anxieties of the age, energised yet agitated, they looked into its eyes and christened it WRITHING!, out now via Leafy Outlook.