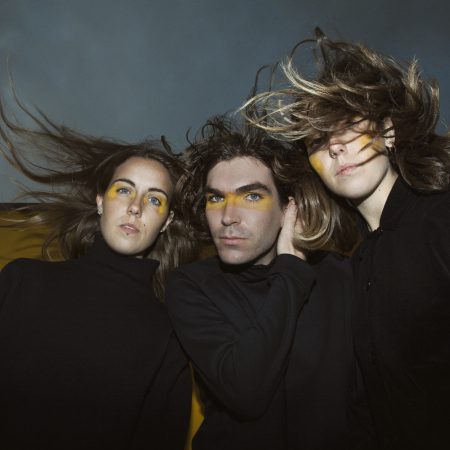 “Hard to classify and even harder not to love” – Uncut
“You have to admire Start Clanging Cymbals’ ambition and self-assured daring” Mojo
“Truly original, while being a riveting emotional experience” Clash
“[A] rare trio of extremely talented multi-instrumentalists” The Line of Best Fit

That line – opening their debut album with a flourish, delivered via multi-part harmonies in the artfully reimagined style of a Seventies radio jingle – could be the clarion call of Wovoka Gentle. The London-based trio radiate the exuberance of Spring with invention and imagination writ large within their golden melodies. That first song, ‘Salient Point’, soon morphs into something wholly different.
“We felt we wanted a really hard-hitting intro track that makes you go, ‘woah, what is this record?’” affirms Imoge Mason who, along with her twin sister Ellie and Will Stokes, makes up the band. “It feels to us like a declarative statement about whatthe album is about: making a lot of noise, saying what you wanna, do you feel listening.

“And it incorporates a lot of elements of the album,” adds Ellie who, like her both her bandmates, is a classically and/or jazz-trained multi-instrumentalist. “There’s the abrasiveness and the sampling, but also violin and mandolin. And there’s this deep, tranquil phase. We also like songs in two halves.”
This, then, is ‘Start Clanging Cymbals’: a kaleidoscopic, experimental, psychtronica, folk-rock wonderland that’s considerably more than an album of two halves.

Wovoka Gentle started their journey in Edinburgh, where Imogen was studying at the time. In 2014 the sisters’ folk band shared a stage with Will’s folk band. They took their name from two pieces by American poet Gary Short, whom Imogen studied under during a year at university in Mississippi. As much as anything they like the confluence of the syllables in “Wovok” and “Gentle”, an idea of a piece with their desire to weave together disparate musical parts. And it’s an idea that extends to how their name fits with their album title. Wovoka Gentle Start Clanging Cymbals is a declaration of action as much as anything else.
Much of 2018 was spent in the ballroom of a mansion in Pembrokeshire, the trio the beneficiaries of a local arts organisation gifted the space by its art-loving owner. Inside they gathered all their instruments, synthesisers and computers, vintage and cutting edge, while also inviting contributions from friends playing brass, clarinet, steel guitar, cello, violin and percussion. They roamed outside, too, making weekly field recordings of nearby beaches, fields, caves and an industrial woollen mill.
The 13 tracks that form the album were recorded and largely produced by the band. Having previously worked with Gareth Jones (Depeche Mode, Nick Cave and the Bad Seeds, Wire), the band teamed up with friend and peer Sam Petts-Davies for mixing and additional production work. Petts-Davies engineered Radiohead’s ‘A Moon Shaped Pool’, co-produced Thom Yorke’s ‘Suspiria’ soundtrack, and has worked extensively with Nigel Godrich and Roger Walters. As Wovoka Gentle put it: “Artists not like us, basically, which is why it felt like a wild card. But that’s why we liked it.”

Wovoka Gentle have announced a string of in-stores as well as a show supporting The Flaming Lips, as they perform their classic 1999 album ‘The Soft Bulletin’ at Brixton Academy in September. The band will also play a series of Sonar Sounds shows in July.