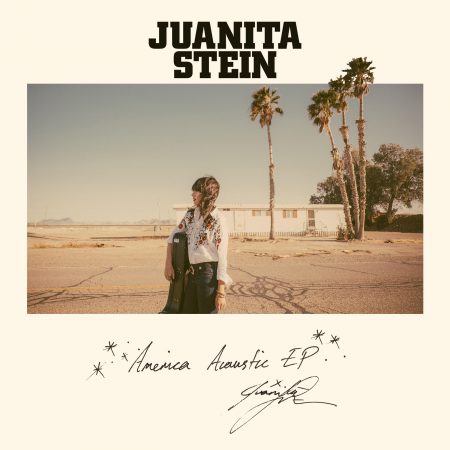 Juanita Stein will release the America Acoustic EP on 16th February 2018. The Howling Bells frontwoman turned solo artist, who released her America album (Nude Records) last July, recorded the EP at home in Brighton in between recent tour dates with The Killers and her own solo shows.

Says Stein: “I had been asked to record some acoustic tracks for a radio station in the US and it occurred to me whilst doing so just how intimate and special these recordings could be. Ultimately, that’s how all my songs are born: just my self and a guitar usually in my bedroom. So it feels like a deeply honest representation of the music, without any outside interference at all. I wanted them to remain sparse, just a few harmonies and layering. It’s an exercise in itself, leaving the songs bare as bones. A lot of my favourite music tends to be all encompassing or artfully restrained. I wanted this to be just so.”

Made up of the acoustic versions of songs from her acclaimed debut solo album, along with Stein’s cover of Johnny Cash’s A Thing Called Love, a song she often performs at her live shows, the tracklisting for the EP runs as follows:

Pre order and get the Instant grat of I’ll Cry here.

WHAT PEOPLE SAID ABOUT AMERICA

“A fab, dreamy journey into the dark heart of country-noir” – The Sunday Times

“Stein sounds like she’s coming of age on this album, addressing both her past and her future, and mostly liking what she sees” – Q

“With an utterly flawless, heart-twisting vocal throughout, ‘America’ spins tales of sorrow and betrayal and turns them into something exquisite.” – DIY ****

“It’s the voice that grabs you… A wonderfully lucid piece of songwriting, emotion lingering on each note” – Clash